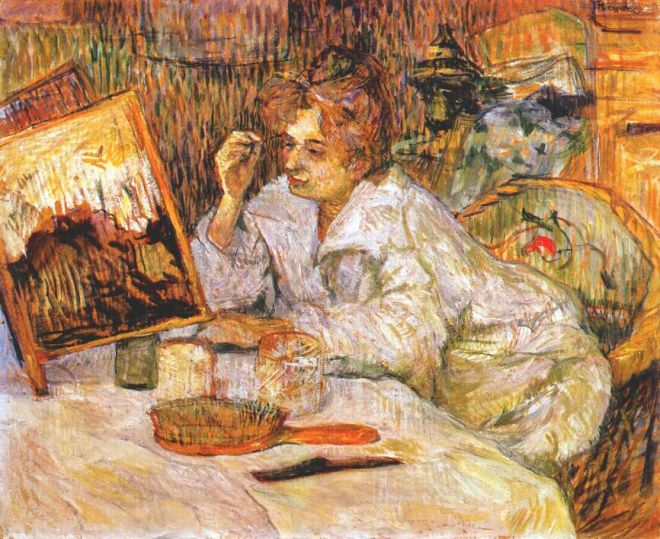 There may come a time, and sooner than I’ll want to admit, when you decide you’d like to wear makeup. I have a lot of complicated thoughts on cosmetics, but no real organization in my mind to those pensées yet. If editing is the “concealer” of the writing world, then consider these thoughts un-made-up. I present them to you as they occur to me in all of their raw, flawed, imperfect glory and messiness.

Somewhere in this world, there is a Polaroid of me as an eight-year-old girl. I am wearing a denim, sleeveless blouse, the ends of which are tied up to show off my midriff. Down my arms on either side are four temporary tattoos of roses in various stage of bloom. I am holding my arms across my chest in a way that looks defiant, and the look in my eyes is classic devil-may-care.

Those eyes are caked heavily in black eyeliner and dark eyeshadow; the skin around the eyes made tanner than a turkey by undoubtedly the wrong shade of foundation; the lips amidst that skin are painted a heavy hue of red and pursed in imitation of a kiss-off. I look like the low-class version of JonBenét Ramsey, and that Polaroid, hidden somewhere in the hoarder organization of my adult closet, haunts who I believed my childhood self to be.

You are far too young to know about JonBenét Ramsey, a six-year-old girl found murdered in her home the day after Christmas in 1996. I was twelve years old at the time, and it was perhaps the first news coverage of a major event that I paid attention to, in no small part because I was straddling the lines of adulthood and childhood, my features and visage made all the more awkward by puberty in full (mood) swing. Here was a girl half my age who had been presumably murdered by an adult, and she was more beautiful than I might ever grow to be.

I tuned in with fascinated horror as they suspected the parents, then a schoolteacher, and finally a particularly incompetent kidnapper. The media fed on the girl’s images like piranhas in a kiddy pool of meatloaf. There is no denying the girl was preternaturally gorgeous for her age:

But I think what preyed upon the imaginations of reporters, girls like myself, and a whole host of other Americans tuning in for the latest investigative update, was the way her looks were so manipulated. In every photograph, she is dressed in the finest of fashion; her hair is styled so that each cascading curl falls with symmetrical precision; she is “dolled up” to resemble a much older woman. Even in the picture above, it is hard for me to believe I’m looking at a six-year-old.

That her killer was never found is a tragedy beyond reckoning, and it hits me even harder now that I’m a mother and I’m forced to wonder, What if she were you, Lily?

But I also wonder, as I did even when I was a child, Was her overly-sexualized beauty in any way linked with her killing? Or with why the media cared so much? Or with why the media blamed her mother? I would learn years later teaching Edgar Allan Poe to a group of college students that part of the reason he wrote “The Raven,” a poem in which a lover named Lenore is mourned by the speaker, is that he believed the most poetical event in the world was “the death…of a beautiful woman.”

One wonders who will mourn the Plain Janes and even the Ugly Broads. Are their deaths no less of a loss?

In some ways, beauty is vulnerability (though current American culture doesn’t necessarily see vice versa to be true). She may, by some, be considered to be an “unconventional beauty,” but musician Ani DiFranco has made two statements in her lyrics about physical appearance that have always stuck with me. They come from the songs “32 Flavors” and “Evolve,” respectively.

“God help you if you are an ugly girl / ‘course too pretty is also your doom / ’cause everyone harbors a secret hatred / for the prettiest girl in the room.”

“It took me too long to realize / that I don’t take good pictures / ’cause I have the kind of beauty / that moves.”

It was Ani DiFranco I was listening to when I started college at the University of Pittsburgh (bald spots and all). Hers was the music that served as adornment to my ears when I refused to paint myself in animal secretions just for the sake of cultural approval. And she was the soundtrack of my burgeoning feminism when I enrolled in a Women’s Studies course, only to end up in a heated debate with the professor.

The topic of discussion was advertising, and the way it objectifies women.

I wasn’t on the side of the ladies in the class who were only in college because they were admittedly interested in pursuing their MRS degrees and who claimed that there was no discrimination anymore. Their proof of this was that they were in the classroom at all. I also wasn’t on the side of the feminists far more hardcore than me who argued that even the phallic shape of shampoo bottles and mascara brushes was somehow proof that we were losing out to the patriarchy.

No, I was interested in what was a current marketing campaign at the time, the Dove Campaign for Real Beauty. Sure it wasn’t perfect, I argued, but wasn’t the fact that we were incorporating bodies that weren’t currently labeled in the “ideal” category proof of positive progress? Weren’t videos like “Evolution”–which shows a model’s face being made-up, beautified and photoshopped until the freakily different finished product adorns a largely ignored billboard–attempting to shine a light on “beauty’s” undeniably artificial process? (See video below.)

Yes, my professor corrected, but the ads were being used to hock cosmetics, so the irony ruled out the message’s revolutionary nature. I felt so shut down, I didn’t find the words at the time to counter that Dove sells antiseptics, not cosmetics. The ad has more to do with (mental and physical) health than appearances. After all, wasn’t it made in response to market research that found “only 4% of women” thought they were endowed with real beauty?

I shudder now to think of how naïve I was then. It killed me to read, when I did a little research for this letter, that the models in these print ads were heavily modified and digitized. In fact, the hired retoucher himself, Pascal Dangin, had this to say of the campaign:

“Do you know how much retouching was on that? But it was great to do, a challenge, to keep everyone’s skin and faces showing the mileage but not looking unattractive.”

That “mileage” and “unattractive” are made synonymous is perhaps one of my major issues with the cosmetic industry. Why shouldn’t we age? Why isn’t life experience equated with beauty?

I remember having heard or read somewhere that makeup is driven by our culture’s obsession with youth. Children naturally have the flushed cheeks and pink lips that women, as they age, defer to liners and sticks and rouge to recreate.

And Lily, you are beautiful, but you’re also clever and filled with wonder. Why aren’t these the traits women emulate in those younger? Why, for that matter, isn’t there a Dove Campaign for Real Truth? (There actually is, I think, in the Beautiful Body Project, but I’m still concerned that even the progressive stance towards telling stories of identity has to be linked with the physical and thus with beauty.)

Is this solely a women’s issue? There’s a line on Wikipedia’s page for “Cosmetics” right now that reads (albeit with Citation Needed):

Ironically, there’s no mention at all of the fact that self-consciousness is what drives women to cake concealer onto their own faces. Nor is there mention of a study which confirms that the general public feel a woman “glammed up” appears more competent for her job (regardless of how unrelated to cosmetic beauty that position might be). Of course, the study was conducted by the company that owns CoverGirl (a cosmetic conglomerate), so how accurate could it be? (I fear the answer is more than I’d like to admit.)

You’d think, then, that I strut my untouched face around proudly, unashamed to privilege my inner beauty. But Lily, your mom is a hypocrite. I use the bare minimum now to keep me from looking like a zombie who gets no undead sleep: a modest amount of eyeliner and a spattering of shadow. That’s it.

It’s a far cry from the girl described in the Polaroid above who was her sister’s living mannequin and guinea pig. When I went one Halloween as a Georgia Peach, your Aunt Loren applied enough makeup on me to rival Tammy Faye Bakker:

That was the same girl who, when your Aunt learned that egg whites make hair shinier but didn’t know not to rinse with hot water, walked around pulling bits of scrambled egg out of her mane all summer.

But even still I have to wonder: Who am I to judge? What right have I to critique Bakker? Society? Any lady who wears more makeup than me? I don’t want to become, as Nietzsche warns, the monster I seek to destroy. And besides, as the video below demonstrates, there are already too many bullies.

So what will I say to you, Lily, when and if you decide you want to augment your “natural” beauty with eyeliner, mascara, eyeshadow, primer, foundation, concealer, lip liner, lipstick, rouge, nail polish, waxes and powders?

I hope I will encourage you to do, not necessarily what’s expected of you, but what you choose. After all, your name is not really Lily, but because this is in public, and I don’t want to embarrass you, that is what I call you. And my name is not really Alyssa, but another name entirely, though the facts, memories and images I write here are all true. It’s what a writer calls a “persona,” and it comes from the Latin word for mask, a device used to hide one’s own authentic face.

So in that way, Lily, aren’t I just like any made-up model? Inside, aren’t we all the same–vulnerable and beautiful and hidden and so humanly afraid?