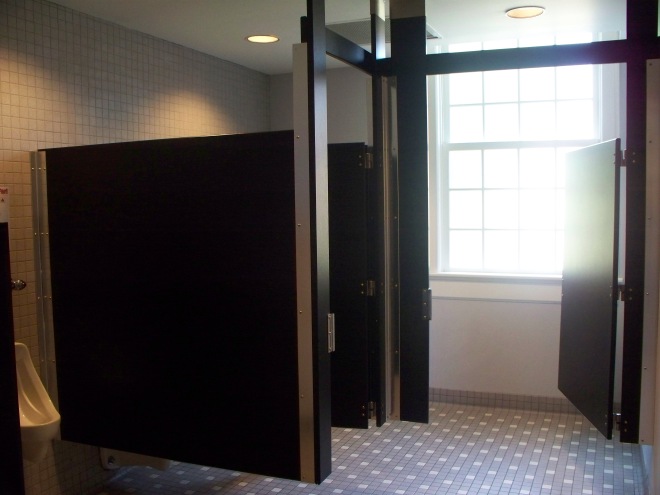 If you haven’t caught this already, your mother’s no Ms. Manners. Short of overthinking issues like sneezing etiquette, I rarely ponder what the “polite” thing to do is in a public scenario, in part because I’m just a rude person (I come by that naturally, thank you very much), but in part because I believe respect is conveyed through so much more than arriving to an event on time or selecting the correct forks for salads, appetizers, entrees and desserts, respectively.

And when I learned that the old expression for manners–“Mind your P’s and Q’s”–came from bar room etiquette (i.e. it’s rude to spill your Pints and Quarts), I was all the less concerned with putting on such airs, throwing my pinky towards the sky as I poured my brewsky–or as the case may be, whiskey–into a gentleman caller’s lap for untoward remarks.

But if there’s one room I spend an inordinate amount of my life in, it’s the bathroom. If you believe a study undertaken by the National Association on Continence, the average American, if they live to be eighty years old, spends an hour a day in the bathroom, which makes up two weeks a year, and three years over the course of a lifetime. Three years. In the bathroom. Just take a second to consider that, Lily. (Of course, as I write this, you can drop a deuce in your diaper wherever you’re at. The world is your restroom.)

To someone suffering from a chronic condition–the interstitial cystitis for instance that I have or the Crohn’s Disease that your Granny Gramma Alison has (amongst many talented others who are likely famous by the time of your reading this) or irritable bowel syndrome or a host of other conditions–that time feels more like a decade. It was not a lost irony on me that the room I’ve felt destroyed my life–the bathroom–was the same room that saved my life when I had to crawl into a bathtub to survive a tornado.

But I digress. All of this is just preamble to the big show, the flatulence to the digestive fireworks, so to speak. (How’s that for an image, little Lily?! I grossed myself out a little.)

The point is, I’ve noticed people have some excruciatingly irritating habits that get to me when I’m forced to endure them in a public restroom. Held hostage by my distorted and damaged bladder, I’m imprisoned in a confined space with the very other people that Sartre described as being “Hell.” And in an effort to teach you better in this life, I wanted to highlight some big bathroom No-No’s to you. So help me, if I catch you engaging in any of the following, I will flush your (practically non-existent) allowance down the toilet.

1) Don’t physically chat where you sh*t.

With the wildfire spread of social media in my lifetime, I know that we’re never truly “alone” and that even somewhat private spaces–like a restroom stall–can become public parties at a moment’s notice. But I beg of you, Lily: whatever conversation you were engaged in as you walked into the bathroom needs to end once you or your chatting partner have sequestered yourselves into the individual stalls.

Unlike men who can line up at the urinals and keep talking while patting each other on the backs or the butts or whatever they do to hash out the local sports team’s victory against the non-local team (wearing shirts that say “City Title + Animal Type: Fighting Those Other Guys Since the Year We Were Founded”), I like my stall time to be alone time.

I’m happy to resume taking care of our dialogue business once I’ve taken care of my defecation business. Or, as is more likely the case, urination business. (And with IC? Business is good.)

2) Don’t virtually chat where you p*ss.

Likewise, the land of cell phones has turned every stall booth into a phone booth.

But when I hear a chatterbox in the next splatterbox jabbering away about anything unrelated to waste disposal, I’m always half-tempted to scream, for the benefit of the person on the other line: “She’s in the bathroom! People are pooping around her, and she has no respect for their privacy! Those background sounds are flushes, not the gentle misty sprays of Niagara Falls! Hang up while you still can.”

I never have–yet. But only because I don’t want to encourage talking across stalls. See #1 on talking while doing #1 or #2.

3) If you hear others shuffling in the stalls, keep your mirror time to a minimum.

When I’m busy trying to pinch off a loaf, the last thing I want to see between the tiny slit of the stall door, is a chick applying lipstick to her puckered mouth with all the speed of a sloth on downers. For one thing, it makes me hyper-conscious of the rose-scent being emitted from my backside that I don’t want her to suddenly taste on those freshly rose-colored lips. For another, it just grosses me out. To the tune of “Love is in the Air,” I suddenly hear “Fecal coliform bacteria is in the air.” No matter how dolled up you get, you’ll still have trace elements of doo-doo in your rouge.

Lily, please get ye to the local cosmetics store for a compact mirror you can use anywhere but where I’m emptying my lemonade tank.

We all know the horror of walking into a stall to find a single floater doing the backstroke across the water like a scat-obsessed serial killer laying in wait. But not too long ago, a professor at the institution where I work, upon stumbling across such a sullied john, clickety-clacked her high heels down the hall to report this to the head department secretary in a huff. “I have an issue,” she practically gasped, “for maintenance.”

That the head secretary had the good sense to go into the stall herself and flush it down rather than dragging the professor back up to the toilet by the hair and rubbing her nose in it like a dog who’d piddled on the carpet only demonstrates the extreme grace and patience required by academic staff.

I know it’s gross to find the previous user’s at best, used TP and, at worst, used breakfast still in the facilities. But if you can-can high kick the flush handle like a Rockette, I think you should-should.

Note: That does not include, though, walking in on a toilet that looks like a crime scene where the victim was apparently a corn-based burrito. If you come upon that punch bowl of brown horror, swirling dangerously close to spilling over the rim, that really is an issue for maintenance. Should you flush and it overflow, it will end up being an issue for everyone‘s flats. And I wouldn’t blame your fellow restroom patrons, Lily,  for wanting to flatten you as a result.

Nothing that comes out of you in a public restroom should make you feel ashamed, Lily. Please don’t be a rush-home-to-avoid-the-public-facilities woman. Hold your head up high, empty your pipes, and wash your hands like a real lady would.

I’ll admit to being one of those disgusting degenerates who hated hand-washing for a period in my life, and thus would play pretend by turning on the sink without actually cleansing my digits. That is so foul, I shudder to remember it now, and I realize today it made me a menace to public health. There’s a special circle in hell for anti-vaxxers and anti-soapers, where they’re forced to recycle each other’s germy, uncovered coughs for all eternity while licking clean each of Hades’ used toilet seats. I will do my best in life to make penance with Mr. Clean so I never end up there.

Heed these simple steps and save the sanity of poor ancient creatures like your mother who remember what is was to spill their bladders without being surrounded by sorority girls snapping selfies for snap-chat. Seriously, Lily. That’s the only thing you could do in a restroom that I’d find truly repulsive.