My one act of clothing rebellion was this: Once, at sixteen, I was wearing a bright peach dress with dark, black underwear. The nature of the colors being what they were, you could see my unmentionables right through my outfit, and my mother didn’t fail to mention it unfavorably. She told me to go upstairs and change my underwear immediately, right in front of my date who had already (likely happily) witnessed my intentional wardrobe malfunction.

I huffed, embarrassed, back up the stairs, removed the offensive undergarments, replaced them with, well, nothing, and threw the dress back on. I was naked as the day I was born under there, my way of sticking it to my mom who had made me so chagrined in front of my boyfriend. I tromped back down the stairs and asked, “Better?” to which my mother replied, “Much,” and exited the room, none the wiser. I had gotten away with it, and to this day, I imagine she has no idea of what I’d done.

Of course, I know what I did, and it puts me in an awkward position to admit it to you, because as your mother, I want to preach modesty, but as a feminist, I want to preach agency. So which part of me will win out when it comes to parenting you? I have absolutely no idea, Lily. Between my heart and my head, I don’t have a clue what to tell you.

My rebellion above might seem pretty lame, but the truth is, my mother was, on the whole, pretty cool about whatever I sauntered around in. From spaghetti string tank-tops to baby-doll tees with lips on the chest to fishnet stockings, I wore no shortage of provocative attire in my teen years, and we saw it from opposite sides of the fence. I thought I was unabashedly expressing my individual identity; she thought it was a phase. We were both right, in a way, in that I don’t trot to work today in skin-tight corsets or own a single item with an animal print. Low-cuts on a small chests don’t raise many eyebrows or drop many eyes down, so even the most scandalous outfit I don now would be relatively tame by modern standards.

And yet, I do believe there’s something sexy about leaving something to the imagination, and I do worry about you, caught as you’ll be in the cross-fire between modesty and slut-shaming, sexual liberation and exploitation. As a woman growing up in the Western world, you’re going to be exposed to a lot of billboards that expose a lot of flesh, and I’d just like you to think critically about each outfit you wear in an attempt to understand its cultural impact and personal statement.

While I have absolutely no problem at all with offensive slogans (and in fact, I can appreciate any rebellion launched via the weapons of wits and words), I do find myself slightly queasy at the thought that, at, say, under thirteen years old, you might want to cake the makeup on and trim the clothing back. Why, when I had shirts myself that covered my (admittedly underwhelming) cleavage in nothing but safety pins? I think it has something to do with your safety, though I know that treads on dangerous argumentative ground.

Do I believe you should be blamed if you’re attacked while wearing an outfit small enough to resemble two band-aids and a cork? No. Do I believe your likelihood of danger goes up by embracing your sexuality through what hangs in your closet (or off your body)? Yes. Is that fair? No. Is that true? Maybe. I haven’t done the research to confirm it; I only know it’s a cliche in our culture that women “bring it on themselves,” as though a mini-skirt were a neon sign with the words “rape me” on it.

I know I want you to make, and see, yourself as more than an object for sexual gaze alone. Ideally, the partner who falls for you would fall for less superficial qualities than what you’re attired in, but that argument cuts both ways, too. It means the person who sees your soul will be as attracted to it as whatever else they might be catching a glimpse of, so it shouldn’t matter what you wear either way.

And yet, and yet. Once upon a time, that first boyfriend who took me out in the peach dress also took me out of it and took a Polaroid. That he may or may not have disposed of that picture some fourteen years later is a point I don’t dare to ponder. And your generation has it so much harder. With social media creating a derring-do that’s more dumb to me sometimes than daring, I have to fear that any moment your flesh is exposed to one person could be the moment a camera captures you and shares what you’ve bared with the world. And I’ve read too many tales of teen girls haunted by the ghosts of pixelated pasts, sometimes all the way to their own graves.

So it’s of grave importance that you recognize the dangers of the choices you make when it comes to what, and how much, you wear at any given moment. Those dangers can be physical, emotional, and psychological, all of which sounds like the angel adorned in the thick robes on my right shoulder is winning out. But, Lily, there’s a scantily-clad devil on my left, and she recognizes the fact that many parents just won’t admit to themselves: You, too, will own a sexual body. And it is your choice what you do with it.

It’s my ideal that you’d make those choices based on safety and certainty and, hopefully, love. But those aren’t the only paths to take, and you have to know that I would love you in a bikini as much as in a burka. I would ask that you judge by more than covers, and that includes yourself as much as others.

There’s an interesting video, for instance, that argues in favor of the hijab as a feminist statement, in that the speaker rejects the commercialized sexualization of Western culture:

It’s a viewpoint I might not have considered–that modesty itself can be more intelligently rebellious than, say, my eschewing any undies to spite my mother. And, truly, I have a hard time seeing the difference in the beauty of the women that follow, whether it be through this Westernized use of a scarf thrown over a fair bit of aired flesh…

…or this more modest statement with a head scarf as part of an outfit that exposes only the face and fingers. 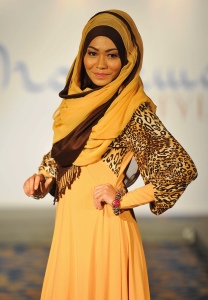 Both women project a confidence that renders them beautiful in a deeper sense than just fashion. But you’ll be born into a culture that expects more of the first than the second, more flesh and less fabric, and to make matters worse, you’ll probably go to a school that has some form of dress code that’s really just a way of policing the girls’ burgeoning sexuality than it is a way of keeping the boys focused on their books. So with the mixed messages you’re being sent (from your school, your mother, your culture), what do you choose?

Though I’m still confused about how, and what, to teach you, and while I still want you to see yourself, always, as more than just a body, and while I still wish you confidence and safety and creativity when it comes to clothing, let’s both agree that when you’re dressing provocatively just to stick it to “the man” (like a teacher or principal or professor or policemen, etc.) who might say your attire is distracting to others (without explaining why or how your shoulders or knees might be inappropriate to bare), then I’ve got your back. I will stand up for your right to be treated equally, as long as you practice how to stand up for yourself when it comes to your textile expressions.

And if you’re wearing “that thing” just to stand up to me? Then hopefully, we can talk it out, and something will change–either your outfit, my mind, or your attitude. After all, I once wore a vampire cape to class, and dated a guy who’d show up to homeroom with a bathrobe thrown on over his clothes. But those are stories for other times, dear Lily. And it might take a lifetime to dissect some of the more heinous of your mother’s fashion crimes.