I’ve quit, for a moment, waging my one-woman war against selfies, especially when I realized that half the battle was my own self-loathing. Instead, I’m swallowing my words and taking the advice of the ladies who’ve tried to teach me that they’re a tool of empowerment. I’m using them to celebrate a momentous occasion in my life: Getting back in the water after almost two decades of being too self-conscious to squeeze into a swimsuit.

But as you might expect from a writer, for me, it’s not about the selfies; it’s about the stories behind the pictures.

Story the First: Think About What I Did. To Myself.

When I was a kid, every year my family would go to Virginia Beach, where my dad’s parents (my grandparents) lived. My sister–your Aunt Loren–and I would wade out into the deep waters, jumping waves and sometimes getting knocked over. We’d gone to the public pool every summer, too, more days than not, and though I’d once gotten in over my head by drifting out of the shallow end before I was ready, I was able to save myself before a lifeguard even noticed I was going under.

I didn’t realize it at the time, but even without ever being formally taught as a kid, I was a strong swimmer. Once, when my father and I got caught in a riptide and he went into a blind panic, I remembered something I’d read somewhere: To swim parallel to the shore. We swam like there’d be no tomorrow. By the time we were safely back on land, we were scared and sore, but we were also survivors.

If it weren’t labeled, I wouldn’t believe that in the picture below (sorry for the crappy quality of my scanner), I was only eight years old. You can’t see my face; I am looking wistfully into the water on one of the last trips we’d take as an entire family to Virginia Beach before my parents would divorce. I should have been laughing, crashing into waves, building sandcastles at that age. Instead, I’m hugging myself, alone and contemplative, having been raised in a fairly violent home from a young age.

I know I hated my body already. I don’t know who took the picture. 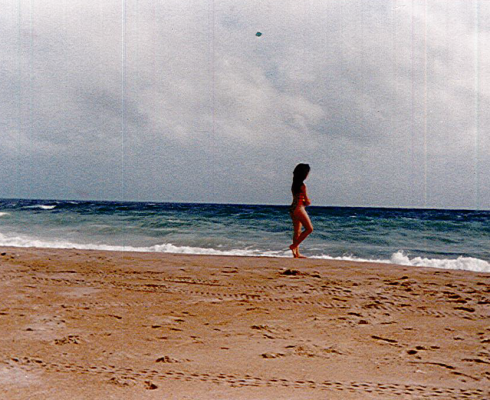 In Pittsburgh, where I was raised, there’s this saying:

“She looks like 10 pounds of chip-chopped ham in a 9 pound bag.”

That is how I viewed myself in a swimsuit. So I did the most ludicrous thing: I didn’t wear one for almost twenty years. I harbor enormous regret now, not for the shape my body was in all that time, but the shape my mind and heart were. I missed so many opportunities, Lily June, to Just Keep Swimming, something I had absolutely loved, as a child, doing.

The featured picture of this post is the swimsuit I’ve been putting you in to go with me to our local pool (but out of respect to your privacy, no picture of you in it will be posted here). Below is the current social media status of your almost 32-year-old mother:

That did feel kind of empowering, even if the first thing that happened when I came to work was my coworkers mocking me for it.

Story The Second: Spot the Differences Between the Two Pictures

In honor of #ThrowBackThursday, let’s do this another way, shall we? Play a game with me, Lily.

What are all the major differences between the Girl on the Left and the Woman on the Right? 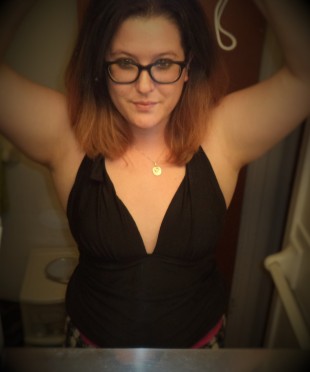 At sixteen, the Girl on the Left is 100 pounds thinner. Sometimes she “accidentally forgets” to eat a meal (or two or three) in a day. As a result, she’ll damage her metabolism for decades into the future.

The Girl on the Left hates the fat reflection she sees in the mirror. When she lays flat, she can stick a finger between her ribs and feel her pelvic bones jutting out of her hips.

She is both her own body’s prisoner and its torturer. When she really hates herself, she’ll resort to cutting, leaving scars on her arms and thighs for decades into the future.

She has no idea what she’ll live through to become a survivor: the diagnoses of alopecia areata, interstitial cystitis, anxiety, depression, obsessive compulsive personality disorder. A tornado. A miraculous pregnancy, followed by complications from preeclampsia resulting in a C-section to become a mother.

The woman on the right is the girl, grown up, nearly sixteen years older. She’s heavier, not just in weight, but in wisdom. When she looks at the girl on the left, she thinks one thing: I FORGIVE HER.