It was in graduate school, when assigned to write six-word autobiographies, that one of my peers came up with the best one I’d ever heard. We were all English majors in the room, and by that point in our lives, we’d read our weight in books, what felt like a thousand times over. So we all gave A. a knowing nod when the sentence she came up with was

At that point in my life, and for many years following, I felt as if, if I never saw another book, it would be too soon. And yet, when I came across this fellow blogger’s post with a list of the books that most influenced her growing up, I found myself waxing nostalgic for the times when I had a warm cup of tea, a rainy window to sit in front of, and an engrossing book sprawled open in front of me.

Now I tell your father that when I retire, if I retire, I don’t want to travel any farther than our local library. I sincerely hope, as you get a little older, that I return to the habit much sooner. In the meantime, with the goal of inspiring you to become a voracious reader like I used to be, I offer you below the list of books that, over the course of my educational lifetime, at least, most influenced me.

Narrowing it down to the Top Twenty (sorry, Allie; I had to make it double!) was like trying to decide which organs I needed most to function, knowing that choosing my heart, brain and lungs meant ignoring my kidneys, liver and spleen. May all the books and their authors left unmentioned forgive me.

For verbosity’s sake, I’ll begin with the books from my childhood in this post, and go to the ones from my adulthood in the next.

The Top Twenty Books that Most Influenced Me

1. If You Give a Mouse a Cookie, by Laura Numeroff (author) & Felicia Bond (illustrator)…

…was one of the first books I ever took home from the library and one of the few I remember my mother reading to me. The lesson of this one was hard, but fair, for a kid to read: If someone else is taking care of you, providing all your needs, be careful how much you ask for, lest they should decide they want to kill you. (I’m kidding! Mostly.)

No quotation from this one would be appropriate to excerpt, but you’ll know it because I already have a copy I read to you. Some say the book defined and influenced your mother’s entire generation…

2. A Wrinkle in Time, by Madeleine L’Engle…

…broke a lot of barriers for its time. It was a “children’s book” that had a female protagonist/heroine in a sci fi world (unheard of at the time of its writing in the late 1950’s), and dealt with quantum physics boldly and evil overtly. It was dark, yet witty, with characters like the genius little brother, Charles Wallace, and the mysterious angel / witch / aliens, Mrs. Whatsit, Mrs. Who, and  Mrs. Which.

I think I was drawn to it because it was another book my mother read to me, and in it, the little girl saves her whole family…

Notable Quotable (as said by the character named Aunt Beast):

3. Tied: Where the Sidewalk Ends/A Light in the Attic, Shel Silverstein

On the eight hour car rides between Pittsburgh and Virginia Beach my family used to take every summer, my sister and I would read the poems contained in these two hardback tomes together. I could single-handedly credit my love of language to the rhythmic stylings of Silverstein, who, amidst the jokes and riddles, often wasn’t so silly:

Sometimes, the circumstances by which you come upon a book are as important as the book’s story. This book was given to me at my one birthday party ever by the prettiest girl in my whole elementary school, Navah Ross, a girl with all the beauty, wealth and entitlement (she owned her own pony, Lily) of the 1970’s Charlie and the Chocolate Factory’s Veruca Salt. I hated her, and yet, this book, with a moral about treating all living creatures with kindness and dignity, begrudgingly softened me to her.

Over two decades later, I still have my original, very beat-up, much beloved copy.

“We call them dumb animals, and so they are, for they cannot tell us how they feel, but they do not suffer less because they have no words.”

…is a Cinderella story as told through Algonquin lore. In it, a girl whose face is disfigured from tending to the fires for her spoiled sisters chases love with a character called The Invisible Being. His sister, though, protects him from false suitors and will only allow him to be courted by a member of the tribe who can prove she really sees him.

The art is beyond stunning, and the lesson–that what meets the heart is more than what may meet the eye–is priceless.

…has messages so potent and powerful, it’s impossible to simply summarize them. Amongst them is my favorite–that our feelings, even our most painful ones, have purpose. To give more away would be to do the book, which I intend to read to you (or give to you to read) when you get older, an extreme disservice.

“Even trained for years as they all had been in precision of language, what words could you use which would give another the experience of sunshine?”

…was one of the first books I read and cried and cried and cried. It is one of those children’s stories not really for children that has deep, philosophical messages about what it means to love–and lose–someone. Every single line of the text is equally priceless, and if you ever want to understand your mother’s heart, you must read it.

8. The Hitchhiker’s Guide to the Galaxy by Douglas Adams

Speaking of laughter, I think I was surprised to learn that sci fi could be funny until this gem came into my life. In fact, to get a little too serious about it (ironically), this book series originally based on a radio comedy taught me how NOT to take life too seriously. Amongst its greater lessons? “Don’t panic” and “Always carry a towel.”

“For instance, on the planet Earth, man had always assumed that he was more intelligent than dolphins because he had achieved so much—the wheel, New York, wars and so on—whilst all the dolphins had ever done was muck about in the water having a good time. But conversely, the dolphins had always believed that they were far more intelligent than man—for precisely the same reasons.” 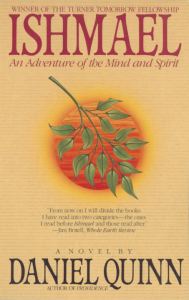 The Wikipedia synopsis of this book reads that it’s “a 1992 philosophical novel…[that] examines the mythological thinking at the heart of modern civilization, its effect on ethics, and how this relates to sustainability and societal collapse on the global scale.” You know, just a little light reading for the average middle schooler, suffering from severe anxiety and panic attacks, and wondering what it might be like if her teacher, too, was a gorilla… I remember reading this book and then feeling pretty guilty for being human.

“You’re captives of a civilizational system that more or less compels you to go on destroying the world in order to live… I think there are many among you who would be glad to release the world from captivity… This is what prevents them: They’re unable to find the bars of the cage.”

Of course, given the shows and even commercials on TV during my formative years, I can’t imagine how I wouldn’t have become a reader.

One hopes the iPad they implant directly into your cornea will have an app for literacy.

4 thoughts on “The Influentials, Part 1: Childhood Edition–On the Occasion that You Need a Read Early On”